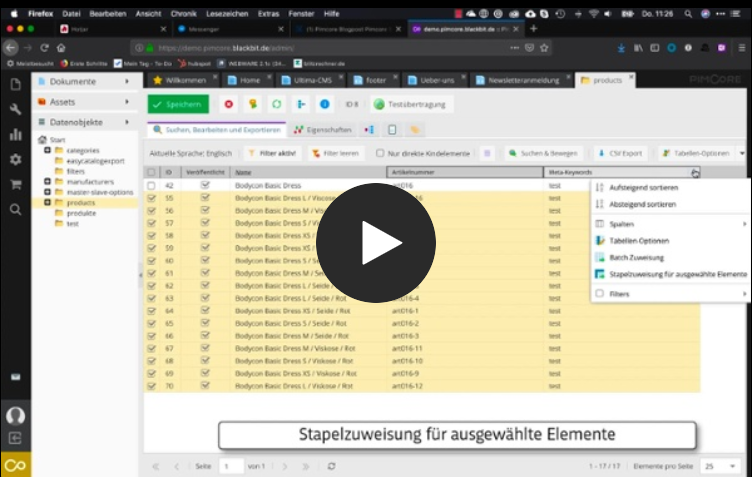 How to increase your productivity with Pimcore 5.6

Just in time for the new year, Pimcore 5.6 has been released. Among the many new features, we have discovered many functions and improvements that will make our customers happy. After all, from current Pimcore projects as well as support and consulting discussions, we know what companies want from a powerful online platform. In this blog entry, we present the most important innovations for our customers (and those who want to become one).

Pimcore 5.6 allows backend editors to select multiple elements (documents, assets or objects) in the data tree at the same time and move or delete them. For documents and data objects, multiple selection also provides the ability to more quickly assign the desired values via drag and drop. For example, multiple products can be assigned to a category at once, or multiple images can be assigned to a product.

Mass editing of object data is a popular feature that is continually being developed and improved. With user interface optimizations in Pimcore 5.6, it is now more intuitively apparent to users whether they are performing bulk edits on all listed objects or just the selected objects.

The user interface for configuring grid columns is now much cleaner and easier to use. In Pimcore 5.6, all available tools and configurations are organized into separate and prominently labeled panels.

The new Pimcore version offers a consistent preview view of Photoshop (PSD) files: The first layer of a multi-layer format, which contains the entire visible part of an image, is now always used to generate the thumbnail.

Especially exciting for internationally active companies: This new feature of Pimcore 5.6 allows you to create language variants of website content even faster. To do this, simply copy the element to be translated in the document tree and select the "Paste as new language variant" option when pasting. Then specify the desired language for the new document. The created language variant is automatically linked to the original document.

Assessment of the new Pimcore 5.6 features

The new Pimcore version comes with all sorts of improvements that allow users to work even more productively. In particular, the expanded options for mass editing of data records significantly speed up data maintenance. In addition, the optimized user interface ensures even more intuitive handling thanks to its clear structure and function labeling.

Is Pimcore 5.6 the perfect solution for your business? Our team will be happy to advise you personally on switching to the latest Pimcore version. Please contact us!